Work has begun at Geddes Brook to transform 17 acres of land in the Onondaga Lake watershed into a diverse new habitat for wildlife. The remediated Geddes Brook will become part of a green corridor connecting habitat from Onondaga Lake to upland sites.

The yearlong project will involve the removal of contaminated soil and invasive plants, and the planting of 50,000 native shrubs, flowers, and trees, which are critical to protecting and enhancing habitat for wildlife such as fish, birds, frogs, and turtles. By planting native species, re-establishing the wetlands, and improving habitat, the project will improve the ecosystem and play a significant role in creating a productive, healthy Onondaga Lake watershed.

Geddes Brook wetlands prior to remediation and the re-establishment of habitat. 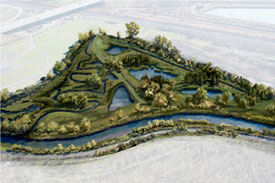 Rendering of Geddes Brook wetlands after habitat restoration is complete.

Honeywell also is working with national and local experts, including researchers and scientists from the State University of New York College of Environmental Science and Forestry (SUNY-ESF); Exponent; Terrestrial Environmental Specialists, Inc.; and Anchor QEA. This team represents several hundred years of collective experience in areas of wetland ecology, biology, restoration ecology, and fisheries biology, as well as the study of landforms and the processes that shape them.

Habitat and Wetlands Specialists in Their Own Words:

Honeywell plans to remove 84,000 cubic yards of soil – the equivalent of a 14-foot-deep soccer field – and replace it with 57,000 cubic yards of clean soil. By restoring Geddes Brook to a more natural, sinuous, meandering channel, water will flow over the channel banks into the wetlands during wet seasons, something that rarely occurs now. This project will create more diverse, native wetland habitats in the floodplains than those that currently exist.

Why is it important to create diverse, productive habitat?
Someone once described habitat as a neighborhood. Essentially, habitat is the physical and biological surroundings that make up the natural environment where plants and animals live, grow, feed, and reproduce. Habitat provides fish, birds, mammals, and other organisms with the necessary elements for life, such as space, food, water, and shelter. Habitat re-establishment is an integral component of the Onondaga Lake remedy and, in fact, is one of the cleanup’s most significant elements.

Following remediation, Geddes Brook and its surrounding wetlands will support a diversity of habitats, including floodplain forest, hardwood swamp, and emergent wetlands. Geddes Brook itself will be longer and also have greater connectivity with the wetlands.

Why is it important to plant native species? What species will be planted at Geddes Brook?
Native plants are very well-adapted to local conditions. They produce a beautiful progression of blooms and textures throughout the year, attract a variety of wildlife, and can control and filter stormwater runoff better and more sustainably than mechanical systems. Hundreds of native plant species are found throughout Central New York in distinct natural communities and thrive in a great variety of local conditions.

Fifty thousand native trees, shrubs, and plants will be the foundation of the re-established habitat in the Geddes Brook wetlands. Examples of native species include red maple, sycamore, pussy willow, dogwoods, witch-hazel, sedges, bulrushes, and many others. These species were selected to re-establish specific plant communities including floodplain forest, hardwood swamp, and emergent wetlands.

Several of the targeted species are part of natural communities that have historical or cultural importance. For example, northern white-cedar, and eastern white pine are among many species being planted in the western part of the Geddes Brook floodplain as part of an effort to re-establish a cedar swamp that was historically present around Onondaga Lake and along Onondaga Creek.

Why are wetlands important?
Historically, wetlands were considered unusable land with little value. About three decades ago, scientists and conservationists began to recognize the importance of wetlands and state and federal laws were passed to protect wetland resources.

Wetlands are often referred to as the kidneys of the ecosystem because of their ability to filter water and improve water quality. Wetlands also provide a diverse ecosystem that supports habitats for plants, birds, fish, mammals, reptiles, amphibians, and other organisms.

How successful are the wetlands near the former LCP site?
The re-establishment of the LCP wetlands has been a tremendous success. This former low-quality wetland, which was dominated almost solely by the invasive common reed grass (Phragmites) and had very little habitat diversity, is now a wetland complex of varying habitat types supporting many plant and animal species.

(Left to right): Before and after photos of the wetlands near the former LCP site.

Deep wetlands were created to support floating leaved plants, such as water lilies. Still deeper areas support important submerged aquatic plants, such as pondweeds and coontail. About 12,000 native plants were planted in the appropriate water depth zone and wetland edges.

Yearly monitoring of the wetland is required. Last year, the third year of monitoring, more than 100 plant species were recorded – a vast improvement over the handful of species that occurred when Phragmites dominated the formerly contaminated wetland.

There also is a significant increase in the wildlife in the area. Several species of frogs, turtles, a vast array of waterfowl and other birds, aquatic mammals (such as muskrats), fish, and other aquatic organisms now call the wetland home. Habitat for most of these species did not exist in the former wetland.

In addition to the increase in the many common plant and animal species, a couple of rare species, such as a state-listed threatened bird species called pied-billed grebe were seen. This species has nested and raised young in the restored wetland in each of the last two years. Habitat for this species did not exist in the former wetland. Another is a state-endangered plant species called saltmarsh bulrush (Bolboschoenus maritimus var. paludosus), which was found in the area.