Nineteen middle school students demonstrated their expanded knowledge and understanding of the Onondaga Lake watershed during Discovery Day at the Milton J. Rubenstein Museum of Science & Technology (MOST). Their presentations on geology, geography, chemical analysis, and habitats detailed experiments the students conducted during Honeywell Summer Science Week in July. The students were from Syracuse City, West Genesee Central and Solvay Union Free school districts and the Dunbar Center. 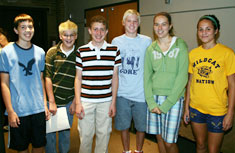 Parents, teachers, representatives from Honeywell, and the volunteers from SUNY College of Environmental Science & Forestry (SUNY-ESF) who were the instructors during the week, were in the audience and commented on the students’ work.

“It is wonderful to see science come to life through these students,” said Honeywell Syracuse Program Director John McAuliffe. “Honeywell is proud to partner with the MOST on a program that will certainly inspire these students to become engineers and researchers who will play a key role in protecting and restoring our precious resources.”

At the end of the Discovery Day celebration, the MOST presented each student with a MOST Associate Pass, allowing each student a year of free access to the museum.

“Throughout the Honeywell Summer Science Week I saw each student’s level of curiosity grow as they became experts on the Onondaga Lake watershed,” said Peter Plumley, exhibits project manager at the MOST. “Curiosity is what drives science and gives these students confidence in their abilities.”

Saturday’s activities marked the second annual Discovery Day celebration. During the week of July 16, 2007 more than 60 middle school students were part of the second Honeywell Summer Science Week at the MOST, an exploratory investigation of the Onondaga Lake watershed.

Created by the MOST in 2006, the week allows students to visit a variety of locations from the Tully Valley to Onondaga Lake, while learning from scientists, engineers and professors about water quality and the environment. Honeywell Summer Science Week at the MOST and Discovery Day are made possible by a generous grant from Honeywell Hometown Solutions, the company’s community relations initiative. The science week’s overwhelming success in 2006 led Honeywell and the MOST to expand the program to reach twice as many students and teachers in 2007.