“FMA Live! inspires students to pursue careers in technology,” said Honeywell Syracuse Program Director John McAuliffe. “Honeywell is proud to partner with NASA to sponsor a program that quite possibly motivated some future scientists and engineers in Syracuse this week.”

Named for Newton’s Second Law of Motion (Force = Mass x Acceleration), FMA Live! uses original hip hop music and choreography, cutting-edge video and interactive science demonstrations to teach Newton’s laws of motion to middle school students. Launched in partnership between Honeywell and NASA in 2004, the program has traveled more than 38,000 miles, reaching more than 140,000 students in the U.S. and Canada.

During each FMA Live! performance, students, teachers and school administrators interact with three professional actors on stage to experience Newton’s laws firsthand through science demonstrations, including a giant sticky wall, extreme wrestling and hot rods. Students laugh and cheer at the stunts and discover an important truth about science:  it can be fun!

Today fewer students than ever before are pursuing science, technology, engineering and math careers, while employment opportunities in these fields are increasing nearly three times faster than all other occupations. FMA Live! is a cornerstone of Honeywell’s commitment to deliver innovative educational programs and help ensure that there is a steady and competitive pipeline of young people interested in science and technical careers. 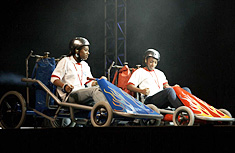