Substantial progress has been made on the Onondaga Lake cleanup plan with the completion of the underground barrier wall, which prevents the primary source of contaminated groundwater from reaching the lake. This week, skilled craftsmen installed the last of the 4,646 feet of interlocking steel panels, near the southwest portion of the lake. The underground barrier wall prepares the area for lake dredging next year.

The barrier wall begins at the West Side Pump Station (near Exit 7 on Interstate 690) and the last section of the barrier wall runs from the East Flume to approximately 1,100 feet east of Harbor Brook, parallel to the CSX railroad tracks. There are 1,033 steel panels in the last phase and 1,620 panels in total.

One hundred twenty local people worked on the project, which was completed under the supervision of the New York State Department of Environmental Conservation (DEC). 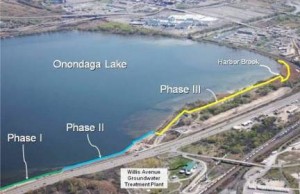 “The completion of the barrier wall is a major milestone in the cleanup of Onondaga Lake,” said John McAuliffe, Honeywell Syracuse Program Director. “We continue to see an improvement in the water quality and now the primary source of contaminated groundwater from the former Allied properties has been prevented from reaching the lake. This is a significant achievement as we prepare for lake operations in 2012.”

The steel panels for the East Wall – part of the third and final phase – were assembled, welded, and coated by JPW Structural Contracting, a firm based in Syracuse, N.Y. Each panel in the final phase weighs up to 4.3 tons and ranges from 44 to 77 feet in length. Contractors applied a waterproof sealant between each interlocking steel panel and connected them by sliding the interlocking joints together.

Steel panels were assembled and coated at JPW Structural Contracting in Syracuse, N.Y.

During installation of the barrier wall, a crane lifted the steel panels into place and a vibratory hammer drove the panels into the ground. GPS units were used to confirm panel alignment. 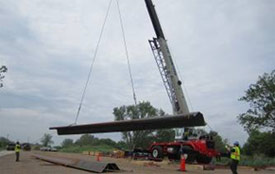 Steel panels are delivered to the lakeshore.

A groundwater collection system, which has been installed behind the first and second phases of the wall, is scheduled to be completed behind the third phase in early 2012. Workers are now digging a trench parallel to this last section of the wall and installing collection pipes. The water collected is pumped underneath I-690 to the Willis Avenue Groundwater Treatment Plant. After the water is cleaned, it is tested to ensure it meets DEC standards. 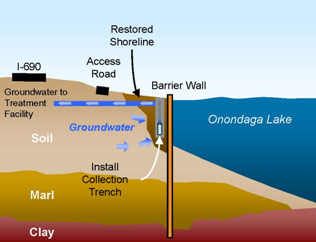 A groundwater collection system, which has been completed behind the first and second phases of the barrier wall, treats contaminated groundwater before returning it to the lake.

A number of sustainable technologies are being used on the project, including a solar-powered barrier wall monitoring system for dredging operations and the use of low-sulfur fuel for equipment such as excavators and cranes. In addition, on-site lake water is being used to control dust and a recycling program was set up for the field support area. 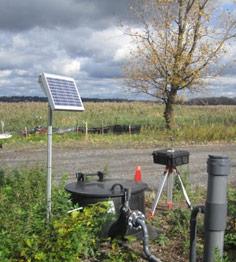 Throughout the project, health and safety are Honeywell’s top priority. An air monitoring program measures air quality at the work zone perimeter.

For more information on the Onondaga Lake cleanup, visit www.onondaga-lake-initiatives.com.