“As habitat loss remains a leading threat to birds and other wildlife, the survival of these species is becoming increasingly dependent on the ability of our communities to make sound and responsible choices,” said Frank Moses, Director of the Montezuma Audubon Center. “With any type of habitat restoration project, it is important to monitor the results of these efforts, and Audubon is looking forward to working with Honeywell to address future habitat management needs at this site.”

“Honeywell is committed to reestablishing thriving, natural habitats as part of the Onondaga Lake cleanup,” said John McAuliffe, Honeywell Syracuse Program Director. “The planting of native wetland plants and trees near the former LCP site is the first of several steps we will undertake to restore wetlands, habitat and the environment near and around the lake.”

“We wanted to create a mix of habitats that would encourage natural wildlife to establish itself here,” said Joseph McMullen, Principal Environmental Scientist at Terrestrial Environmental Specialists, Inc. “We expect to see everything from geese and ducks to great blue herons and hawks. In the past three weeks, we have already seen wild turkey and muskrats.”

Honeywell worked with McMullen to design a wetlands and landscape plan to reestablish native species and wildlife to the nine-acre area. McMullen also consulted with SUNY-ESF Professor Donald Leopold, Ph.D. to ensure the site’s native species were included. Today marks the end of three years of design and three weeks of planting. Throughout the habitat restoration Honeywell also consulted with Audubon New York regarding future educational opportunities at the site.

The former LCP plant site was the major source of mercury reaching Onondaga Lake.  In 2005, Honeywell removed more than eight tons of mercury from the property through an innovative process called “soil washing,” and installed a protective barrier wall and cap.  Honeywell also excavated mercury contamination from the wetlands prior to the restoration. 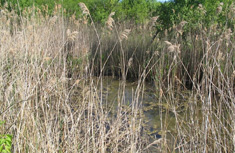 Prior to excavation, the wetlands were covered by Phragmites, which are non-native invasive species that limit the value of habitat to wildlife. To enhance the quality of the wetlands and to limit the presence of the Phragmites, McMullen and his team divided the wetlands into four planting zones designated by the depth of the water. The team chose plants appropriate for each zone. The plants will develop into habitat that will support a diverse array of wildlife. Today, more than 20 native species are planted on the site including, trembling aspen, woolgrass, green ash and pussy willow.