In a dedication ceremony on Saturday, Honeywell was recognized for joining a community effort to create a youth soccer field in the Town of Geddes. The Western Onondaga Youth Soccer Association thanked Honeywell, landowner Frank Pope, and the Town of Geddes for supplying land and resources to build Pope Memorial Soccer Park. Honeywell contributed the parking area along with necessary grading and drainage improvements. 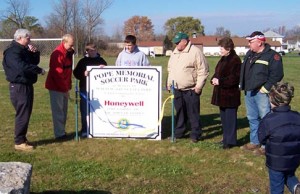 “Honeywell is proud to be a part of Pope Memorial Soccer Park,” said Honeywell Program Manager Al Labuz. “Working in partnership with the Western Onondaga Youth Soccer Association, Frank Pope and the Town of Geddes, Honeywell was able to redevelop previously unusable land to support a recreational need within the Geddes community.”

The land for the soccer field was donated by Pope, owner and operator of Pope’s Grove Golf Course, in memory of his parents, Walter and Velma Pope.

“As with most groups of our type, we struggle to find assets for field development,” said Roger Garcia, president of the Western Onondaga Youth Soccer Association. “Through a joint community partnership with Honeywell, Mr. Pope and the Town of Geddes, we were able to convert an unsightly, overgrown piece of property into an attractive soccer park.”

Pope Memorial Soccer Park will be used by members of the Western Onondaga Youth Soccer Association.