Honeywell completed construction of a critical component of the Onondaga Lake cleanup, a groundwater treatment plant, one year ahead of its original schedule. The new Willis Avenue treatment plant is one part of the $20 million groundwater collection and treatment system Honeywell has been constructing since April 2005 under the supervision of the New York State Department of Environmental Conservation (DEC). The system will collect, process and treat contaminated groundwater that will accumulate behind a one and one-half mile barrier wall along the southwestern shore of the lake. The barrier wall, which is currently being designed, will prevent contaminated groundwater from entering the lake. 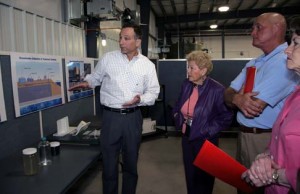 “The completion of the groundwater treatment plant marks significant progress in the cleanup of Onondaga Lake,” said Honeywell Syracuse Area Remediation Program Director John McAuliffe. “The facility is a critical component of the cleanup. Once the barrier wall is complete and the system begins operating, contaminated groundwater that accumulates behind the barrier wall will no longer reach the lake.”

With the ability to process 150 gallons a minute, the groundwater treatment plant will remove metals, such as mercury, and other contaminants from groundwater collected from the southwestern shore of Onondaga Lake.

The eight step treatment process utilizes filters, tanks, air strippers, activated carbon and a thermal oxidizer/air scrubber to remove metals, such as mercury, and other contaminants from the groundwater. The system will process and treat 150 gallons a minute. All solids filtered out of the water will be trucked to an off-site DEC-approved facility for disposal or recycling. Treated groundwater will be tested to ensure it meets DEC guidelines and will be returned to Onondaga Lake via piping under I-690. If needed, the treatment plant can be expanded to process three times its current capacity. 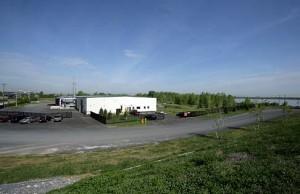 The new Willis Avenue Groundwater Treatment Plant will process and treat contaminated groundwater that will accumulate behind a one and one-half mile long and 45-foot deep barrier wall on the southwestern shore of the lake.

While touring the groundwater treatment site, visitors were updated on other lake remediation progress. Engineers have recently completed collecting sample cores from another 50 locations in Onondaga Lake to support the design for the barrier wall. Throughout the summer, Honeywell will complete the remediation of the former Linden Chemical and Plastics (LCP) plant, including installing the pumping wells, groundwater storage building, cover and site landscaping. Construction and restoration work at the former LCP site is expected to be complete at the end of August 2006.

For more information on the Onondaga Lake cleanup, visit  www.onondaga-lake-initiatives.com.