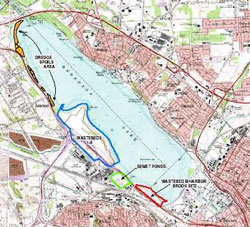 February 24, 2004 – Honeywell International today announced that with approval from the New York State Department of Environmental Conservation (NYSDEC), it will begin cleanup activities at four sites along the southwest shore of Onondaga Lake that will prevent the further flow of contaminants into the lake.

The company will undertake an investigation and cleanup process on four large tracts of land that total 485 acres. The four projects will reduce the levels of environmental contaminants in the soil and prevent further migration of pollutants into Onondaga Lake. The cleanup will also explore a number of possible recycling options, including the development of a non-hazardous material that could be used as a replacement for coal.

Honeywell’s work will be closely monitored by NYSDEC. The Harbor Brook project will eliminate specific sources of contamination to Harbor Brook and Onondaga Lake. The second and third projects – at Wastebeds 1-8 (near the State Fairgrounds parking area) and at the “Nine Mile Creek Dredge Spoils Area” – will determine whether any additional flow of contaminants into the lake is likely at those large sites. The Semet Tar Ponds project will examine the feasibility of converting a coal tar byproduct into an alternate fuel or a non-hazardous feedstock for the tar industry.

This new four-part initiative follows a series of eight similar consent orders to which Honeywell agreed in the spring of 2002. It also follows Honeywell’s recent completion of a cleanup at the former site of the Linden Chemicals and Plastics Co. plant in Geddes.

The Harbor Brook project includes nearly one mile of the lakeshore property (as indicated on the map above). The project will stop groundwater, which picks up contamination as it flows through the site, from entering Harbor Brook or Onondaga Lake. Honeywell will construct a vertical barrier along the shoreline perimeter of a former wastebed and upstream along the west bank of Harbor Brook. That barrier will be about 6,000 feet in length, and will extend to a depth of between 10 and 40 feet. A groundwater collection system will then be built within the limits of the barrier. The collected groundwater will be pumped to the Semet – Willis Waste Water Treatment Plant, which is currently being designed.

The second project, in the location known as Wastebeds 1-8, involves 320 acres along two miles of shoreline north of Exit 7 (the Solvay/Fairgrounds exit) off I-690 (see map). This area has a long history of industrial use: The Solvay Process Company began using this area around the year 1920 to support the production of soda ash using a manufacturing method known as the Solvay Process. Wastebeds on the site were constructed for use as settling basins for the large volumes of waste generated by the Solvay Process. Last used in the early 1940s, these sites are now owned by Onondaga County and New York State. The County is planning the extension of an existing bike trail on the site. The project will investigate whether the site requires further remedial action. This spring, motorists along I-690 are likely to notice activity at the site.

The third project, known as the “Nine Mile Creek Dredge Spoils Area,” will similarly investigate the remaining two miles of the western shoreline. During the late 1960s, the lake bottom – in an area just beyond the mouth of Nine Mile Creek – was dredged, and the dredged-up material was placed behind one or more bulkheads along the shoreline. The area includes about 19 basins built between 1966 and 1968 and filled by 1973.

The dredged-up material was covered with clean soil, isolating it from surface runoff and human contact but not from rainwater infiltration and groundwater. However, samples collected in 2000 in Basins 1 to 4 indicated the presence of contaminants about 10 feet underground. Additional investigation will determine whether these contaminants are migrating into the lake and identify which contaminants may be in the other basins. Depending on the findings of that investigation, NYSDEC may order Honeywell to develop and implement remedial measures.

The Semet Tar Ponds project has already been intensely studied and cleanup efforts have long been under way.

In the summer of 1995, Honeywell performed an interim remediation effort by putting a temporary cover on the Semet Tar Ponds, primarily to reduce emissions and odors. This cover is replaced annually. Honeywell also launched a scientific investigation into the characteristics of the materials there, leading to the discovery of a way to convert the Semet tar material into a high-BTU-content fuel. Pilot studies have proven that this hazardous waste can be safely recycled.

Taken together, the four consent orders will continue the environmental investigation and remediation of large tracts of land alongside Onondaga Lake. Under the strict supervision of NYSDEC, the projects will protect public health, improve the habitat for wildlife and make the land available for recreational purposes.

Thank you for reading. We hope you find this information valuable. Please offer us your ideas and your feedback by sending messages to us via e-mail at honeywell@onondaga-lake-initiatives.info.