On Sunday, the Solvay-Geddes Community Youth Center opened one of their holiday gifts – or rather, they tore it up.  Solvay Tigers Athletic Club President Joseph Alcaro joined Honeywell and the DeSpirito family at the center’s annual holiday party to accept their donations to pay off a 10-year loan that covered recent pool repairs.  In celebration, Alcaro ripped up a replica of the loan.

“We are honored that Honeywell and the DeSpirito family continue to show their commitment to ensuring that our center remains the viable, community asset that we all enjoy,” said Solvay-Geddes Community Youth Center Executive Director Leonard Pfeiffer.

“Honeywell is proud of its partnership with the Solvay-Geddes Community Youth Center,” said Honeywell Syracuse Program Director John McAuliffe. “The center is an important neighborhood asset and a part of our history in the Solvay-Geddes community.”

The pool, which is used extensively by the community, seniors and youth center members, was in danger of closing permanently if repairs were not made. The Solvay Tigers obtained an emergency loan that was used to replace the original pipes and upgrade the pool “deck” with a non-slip surface. The pool is now in great shape and the loan is paid thanks to contributions from Honeywell and the DeSpirito family.

Honeywell has had a long-standing relationship with the center. When it was built in 1963, Allied Chemical and its employees contributed greatly to the center’s original construction, donating labor, materials and equipment.  In 1965, the pool was dedicated by Solvay Chemical Corporation.  Allied and Solvay later became Honeywell.

In 2005, the first major structural overhaul of the center was supported by two grants – $100,000 from New York State Senator John DeFrancisco and $250,000 from Honeywell.

The DeSpirito family has shown continuous support of the Community Center and the Solvay community. 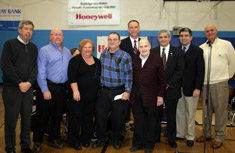