In preparation for Onondaga Lake dredging and capping, archaeologists from the Lake Champlain Maritime Museum completed a thorough investigation to determine the existence and significance of underwater objects that may be affected by cleanup activities. The study was done in partnership with Honeywell.

The final Underwater Archaeological Report, which was approved by federal and state authorities, identifies 20 underwater objects that have historical significance. The agencies approved the recommendation to leave most of the objects in place while completing archaeological documentation, or “data recovery,” on six of the objects: the old Salina Pier, two barges, a concrete breakwater, a series of pilings, and a canal boat.

“Data recovery will allow us to help preserve the history of Onondaga Lake for future generations,” said Adam Kane, archaeological director for the Lake Champlain Maritime Museum. “Extensive investigations have shown there is historical significance associated with these objects and it is valuable to document them.” 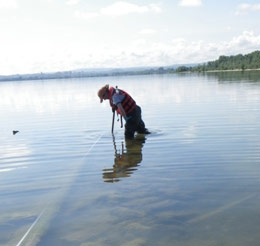 A technician from the Lake Champlain Maritime Museum collects samples last summer from a sunken barge.

“The objects in Onondaga Lake are best left underwater,” said Gregg Tripoli, executive director of the Onondaga Historical Association. “After being submerged for, in some cases, more than 100 years, the objects would rapidly deteriorate, crack or lose any value within a few years.”

The archaeological survey followed procedures outlined in the National Historic Preservation Act, and was completed with the support and approval of federal and state authorities.

The federal procedures require that an archaeological survey must:

The museum conducted investigations including 42 dives, 27 days in the lake (using sonar scans and videography), and more than 4,000 hours of work. Sixty underwater objects were documented. It was determined that 20 of these objects meet the basic criteria of eligibility for the NRHP. As a result, Honeywell adjusted the lake dredging and capping design to avoid or minimize the impact on these objects. The adjusted design will still protect the public’s health and safety, and the environment. 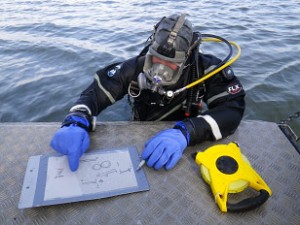 The data recovery effort will be conducted in coordination with EPA, DEC, and SHPO. Data recovery, which could include drawings, underwater video, and photography, will document the historical significance of these underwater objects. Local stakeholder input will help determine the best way to make the results publicly available.

In addition, the final plan includes the recommendation of a “Syracuse Maritime Historic District” in the southeast part of Onondaga Lake. The area comprises the remains of seven wooden watercraft, six areas of marine infrastructure, and three rock mounds. As a result of the recommendation, the area was given the same legal status as historic districts around the country.

“The consensus of the agencies was to treat these objects as if they were on the National Register,” said Kane. “A formal listing is not industry practice for environmental, highway, or redevelopment projects.”

Lake dredging and capping activities are not expected in the area of barges, or the southeast part of Onondaga Lake, for at least three years. Perimeter zones will be established around the underwater objects that are not part of the data recovery process and dredging operations will take place outside of these zones. The objects will be marked for navigational safety and the lake bottom cap will be placed over the objects.

For more information on the Onondaga Lake cleanup, visit www.onondaga-lake-initiatives.com.